AIFF is honored to talk with the inspiring and insightful Polish filmmaker, Tomasz Sliwinski, who shares an intimate look into the compelling dramatic film, Ondine that brings to light the rare and tragic condition, CCHS. 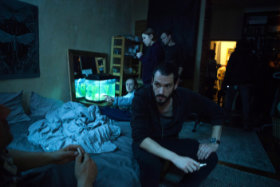 AIFF – The film is inspired and dedicated to Dla Leo, can you talk about how you approached creating a film that deals with Congenital Central Hypoventilation Syndrome (CCHS)?

Tomasz – This film is dedicated to my son Leo who suffers CCHS (Dla Leo means For Leo in Polish).

My son is already 10 years old, so it has been awhile since I have been dealing with CCHS. When Leo was born, my wife (Magda Hueckel) and I made a short documentary about our first months together, called Our Curse. It was released in 2013 and was quite successful worldwide (it even got an Oscar nomination in 2015). It was an amazing thing because thanks to that many people realized that there is such a rare disease as CCHS. And, as in the case of other rare diseases, the biggest problem is lack of proper diagnosis at the beginning.

Many good things followed afterwards: American CCHS Network decided to create the CCHS Foundation in order to gather money to find the cure for CCHS and we became its representative for Poland. We also created our own Polish CCHS Foundation "Lift the Curse" and started working closely with other CCHS foundations and associations worldwide. We also know about many medical cases that were diagnosed thanks to our film. But we also felt that we should continue the subject of CCHS in another movie, as Our Curse was not enough, it was sort of the tip of the iceberg. After years of living with CCHS and after meeting many people suffering from this condition, we decided to make Ondine. This film was also coproduced by our Polish CCHS Foundation, with a help of Italian CCHS Association and also German CCHS Group.

It was inspired by a story of one CCHS young adult we met, who said that he keeps his conditions secret as he doesn't want anyone to know about this. We felt that it was terrible, that we would never want our son to keep it secret, but we started to investigate further, trying to imagine how life of such person could look like and what possible consequences it could have on him and also people around him. Because CCHS, and also any other disability, does not only affect the person affected by this, but also all his loved ones, relatives, friends. So, this was the starting point for writing this story. For me it is a reflection of all our fears and hopes connected with CCHS and our son. But this time, compared to Our Curse, we wanted to play a bit with a myth about Ondine and her curse, to make sort of modern version of this myth.

AIFF – The actors, Barosz Bielenia and Magdalena Kolesnik, gave really strong performances, what did you discuss with them in preparation for their roles?

Tomasz – They are really great actors and I am really happy I had a chance to work with them on this film. I think mainly the role played by Bartosz was very challenging for him, as he played sort of my future projection of my son. We discussed a lot about CCHS, I sent him a lot of information I got from young CCHS adults, with whom I consulted on the script. He is an amazing actor, who can really get fully into the role once you show him the direction - then he can enrich the role and come with an amazing performance that is way beyond your expectations. The same with Magdalena, once she knows the direction and feels the role, she just becomes this person. It's amazing because this role was completely different to any of the things she played before. Once I asked her, if she would like to act in my film, she immediately agreed and on the next day she dyed her hair black (because she is blonde) which put her in the role from the beginning - she just became this girl from my film.

It's funny also that she and Bartosz knew each other from early days, as they are from the same cities and their families were very close - but I didn't know it before I asked her to play in my film. They immediately had this amazing bond and energy together. Before my film they were both very good theatre actors but didn't play much in the movies, which was also great for me, as they were kind of fresh, new faces in Polish cinema. You may also know Bartosz, because after Ondine he played the main role in a very well-known Polish film, Corpus Christi, which was nominated for Oscar Academy award in 2020 in Best Foreign Film category.

AIFF – The music and sound track for the film are extremely powerful, were you thinking about that while writing the film with Magda Hueckel?

Tomasz – Yes, I had already this particular music in mind when we were writing the script. Music always plays a very important role and in this particular case, from the very beginning, we knew that the girl has to come from completely different world than Cezary (CCHS young adult), so that his mother would have a problem with accepting her and also that her lifestyle would be very theoretically non-compliant to living with a disabled person. So we knew she has to be kind of a rock singer. And then I went to one concert, where the supporting band was a Polish band, Obscure Sphinx - and once I saw the lead female singer, I knew from the beginning that this is the girl from my film - the way she acted on stage, being aggressive and at the same time very feminine, and the visual style they used, even the lyrics of the songs - it fit perfectly within the context of my film. And then, few years later, I went to see them live once again, and the singer was pretending to strangle herself on stage with the microphone wire and I was amazed, as it was exactly in line with CCHS and the context of my film. So I talked with the band, asked them if we could use their songs in the film and also use their scenic image and they agreed. So the final version of the script was written with the particular songs in mind. At the beginning, I even wanted the singer from this band to act in my film and play sort of herself, but she didn't want to do it.

AIFF – Was it a conscious choice to shoot in winter? Would spring or summer exteriors changed the tone of the film?

Summer for sure would be not suitable to tell this sort of story, which was supposed to be rather cold, but at the beginning we were planning to shoot it in early spring or late autumn, as I wanted more water in my film, to be in line with the theme of Ondine, the water goddess. But as it is with low budget films, we had to adjust our schedule to the actors (and all three of them are theatre actors working in different theatres so finding a proper time to shoot which would fit them all was a nightmare). So at the end we knew that either we shoot it in winter, or we have to wait again until next autumn, and I really felt that we have to use this creative energy we had at that moment. It was funny, that there was even no snow at that time (so it looked almost as early spring) but just the night before we were to shoot exteriors it started snowing heavily. But now I feel it was a great thing, because snow, representing the frozen water, the state in between, even works much better in the context of the film and the story of Ondine.

AIFF – The cinematography really compliments the story with a rich palette of colors, was it complicated shooting in a club atmosphere with dark lighting?

Tomasz – We worked a lot with my cinematographer Bartosz Swiniarski, and also with my wife, Magda Hueckel (who also played the role of production designer) to find the proper color theme of my film, we prepared a color palette which we used, so that all set design, costumes and cinematography is in line. I love Bartosz's work because he comes from documentary genre and he likes the films to be lit in a very natural way, as dark as possible, which is completely in line with how I visualized this film. He is also very precise, he was making lots of test before to choose proper lens for the film (eventually we used 3 sets of lenses, different for each part of the film) and use proper lighting. He also worked very closely with the color correction to get the final result as intended.

The scene in the club was quite complicated especially that it was a long master shot with many elements who had to work together (initially this master shot was longer that in the film but we had to cut it due to time constraints to fit within a 40 minute film. And, of course, extra lights had to be properly installed, so that it lit certain elements but in a way that is completely in-line with the light that could be found in such clubs (which are usually very dark). And then the actors had to act within these spots of light during this master shot so it was a bit complicated, also taking into account all the extras playing in that scene (of course we didn't have enough extras for this size of the club as we couldn't afford them, so they all also had to move during the shot from one side of club to another to make the club seem full. But at the same time it was very fun and exciting thing to do. And it was great for me also that we were shooting this in the same club in which I saw the band Obscure Sphinx live, so I had this particular club in mind when I was writing the script.