AIFF welcomes Richard Levien with his intimate and powerful portrait of two children fighting for the release of their mother from USA immigration detention. 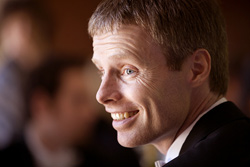 AIFF — What were the difficulties shooting on the road with 2 young actors and an 18-wheeler?

Richard — As for the two kids, before I met Izabella and Jason I was worried about working with kids on a feature film. I shot my short film, “Immersion”, with untrained actors, so the kids and I were both really learning filmmaking together and it took a lot of rehearsal and trial and error to get the whole process working. But Izabella and Jason were such pros that honestly, directing them was exactly the same as directing the adults - let them do one take completely on their own and then give small notes. Of course their parents were acting as coaches behind the scenes, and for example, Oscar Alvarez, Izabella's dad, who is a filmmaker and actor himself, was amazing.

The 18-wheeler was a big challenge. We had to film dialog scenes while driving the big rig truck. Originally I had my heart set on a process trailer, but of course on our budget we had to rule that out - as much for the extra time all that setup would take, as for the cost of the trailer itself. But I wanted to get some sense of rocking motion to add realism. So my friend Tony Acosta, another great local filmmaker, came up with a kind of seesaw using 2 long pieces of 2”x12” timber and two smaller pieces of wood as fulcrums. We drove the truck up onto the seesaw and then had PA's jump up and down on the other ends during the takes. We added in a light gag with a reflector, a green screen out the window, the camera perched on top of a ladder, and we were set to go.

AIFF — Izabella Alvarez, gives a very strong performance, how did you prepare her mentally for the more emotionally scenes?

Richard — Honestly, we had very little time for rehearsal, so she was mostly preparing herself, honestly! On day two of shooting, when Izabella and Jason and Ana had to do a very emotional scene from the end of the movie (I don't want to say much more because of spoilers!), even though they barely knew each other - we'd only had time and budget for two days of rehearsal before we started shooting. Ana asked for some time before we started that scene, then she was amazing, and I think she was really helping Izabella find her emotional state. It's one of the only times in the entire film where Izabella's character, Itan, gets to be a kid and be vulnerable. To see them both do such an incredible job, so early in the shoot, was tremendously exciting for me as a first-time director.

AIFF — What lead you to this story, it's obviously a very personal film.

Richard — When I began work on the script, my wife was a third grade teacher, and a child in her class recently had her father taken away and deported. It took weeks of building trust to find out why this girl, previously bright and engaged in class, was suddenly listless and prone to anger or tears at the slightest provocation. I interviewed her as part of my research. Her sadness, but also her bravery, hit me in the gut in a way that no headline or statistic ever could.

Immigration recently became one of the most urgent topics. As U.S. President Trump has ended the DACA (Delayed Action for Childhood Arrivals) and DAPA (Delayed Action for Parents of Americans) programs, it is now up to Congress to enact legislation to protect the people previously covered by these programs. Meanwhile, tens of thousands of families continue to be forcibly separated every year. This film can be a focal point for those trying to understand the real families affected.

I am from New Zealand originally. I am now a US citizen, living in San Francisco's Mission district. As an immigrant myself, I share the story of all immigrants - that of moving away from home in search of a better life, in search of opportunity. So I'm drawn very strongly to stories of immigration.

AIFF — How did you go into filmmaking from theoretical physics?

Via trying to be a rock star and failing :) I loved physics but the actual job of being a theoretical physicist was too lonely for me, and the gratification too delayed. It took me a while to find filmmaking, but what I love about it is that it is so collaborative - you literally can't do it all by yourself, and when you involve other people, the result is so much better than you could have imagined by yourself.

AIFF — What else do you want to say to the staunchest anti-immigration supporters?

Richard — I think there is actually a lot of common ground, around decency and humanity. I want “Collisions” to appeal to the humanity in all of us, no matter what our views on immigration. Even if some people want to deport every immigrant in the country, surely we can agree that we should guarantee people phone calls (like US citizens get) when they are in immigration custody, so families can find out where their loved ones are. There are all kinds of human rights abuses in the immigration enforcement sphere (like families not hearing from their loved ones for days or even weeks when they are in custody, or not getting adequate medical care) that I'm sure we can get bi-partisan support on, once people are aware of the issues.