Gifted filmmaker and journalist, Olya Schechter courageously traveled to the front lines of war and returned with the gripping story of Deki, an expert sniper hardened by a life time of conflict. This up close and well crafted film will most definitely leave a lasting impression. 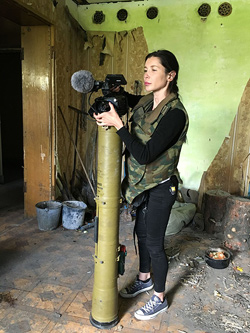 AIFF – How did you remain calm in a war zone and capture the humanity of Deki, he never appears angry or malicious, he treats his job like an artist. After filming over a period of time do you forget sometimes that a war is going on and it becomes normal?

Olya – When you are in the midst of a story you don’t think about the dangers around you. You go after that story. You think about capturing a good shot, an emotion, or a bite. In war, I often looked towards Deki for the signs of danger. This way we established a degree of mutual trust: I trusted him on the front line and he trusted me in the editing room. After being in the Donetsk Republic for sometime it did not feel strange that the war was around us. For most it was the new normal. But back in New York watching the footage felt very surreal. The juxtaposition of the two worlds was difficult to grasp.

AIFF – Have you experienced any resentment from opposing sides of this conflict?

Olya – Several times during the time when I was shooting, I got death threats from the supporters of the Ukrainian army via social networks. But after the film was finished and shown at film festivals, I have not experienced any resentment from the opposing side.

AIFF – After filming and being around the violence, how has it changed your view of war and conflict?

Olya – There is nothing glamorous about the war when you are in the midst of it. There is a sticky smell of death all around and you often have to overcome a strong desire to get to the safe zone. In this particular conflict, there is a set of superficial rules but in reality, it’s the wild, wild West. Violations on both sides take place daily making for a more interesting content but less safe environment. You never know what to expect. The unfortunate thing was to watch young capable men get sucked into this war and waste their health on the conflict they don’t fully understand. Violence becomes normal and a level of humanity gets lost.

AIFF – What do you hope people who watch your film understand about Deki and the role he plays in the war?

Olya – I wanted to show that Deki is a product of certain historic events that have shaped his world views. His experiences in the war in Bosnia and Kosovo have shaped him. And now that most of the professionals from Russia have left the region, he found his purpose in this war and by teaching and helping the local rebels that have no prior military training.

AIFF – Is Deki getting professional help to deal with the psychological strain he put himself under?

Olya – Deki is back on the front lines and most likely will remain there until the end of the conflict. I don’t think he is capable of remorse until he gets out of the conflict zone because his killings are viewed as an act of honor by the people surrounding him.